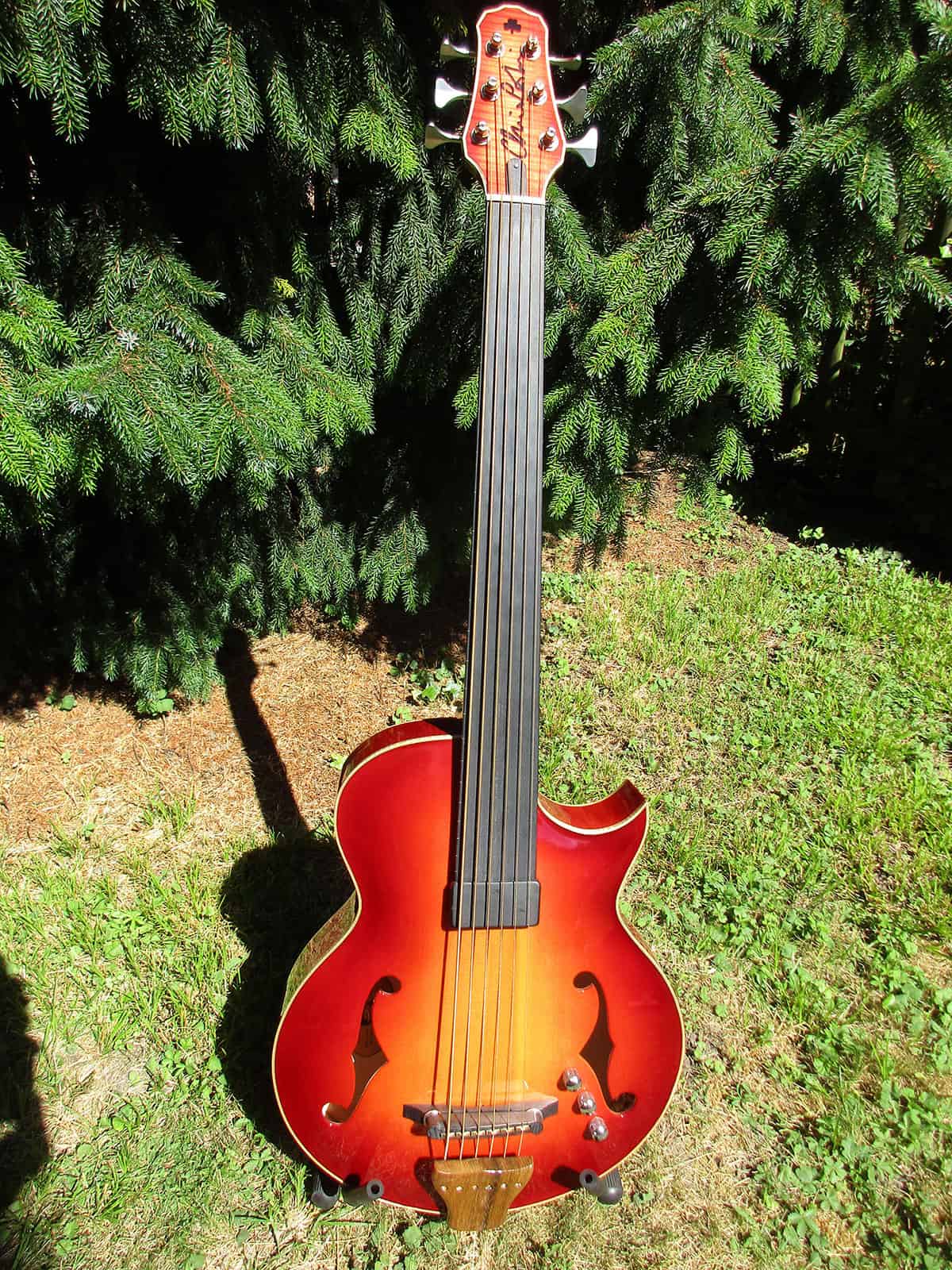 I really love my acoustic bass, so I asked myself how to push the limits. I was at a big band rehearsal where the guitarist was playing a wonderful D’Angelico Archtop jazzer. Fueled by a bottle of red wine I had the idea – fretless, 6-string, a fine neck like the Singlecut and pretty like an old jazzer. On the very evening I’ve called Chris to break the news. He just replied “challenge accepted” and told me to get sober again to discuss the details.

We spent some weeks discussing as such a bass was never built before. Chris was delighted by the idea of a pure acoustic bass, without any sustain block and built completely out of non-tropical wood. He was concerned about the 6-string longscale layout, so he built a baritone acoustic first to get an idea if it could work.

Chris asked for two things. First of all patience. I knew about his 15 year long battle with cancer and his health was declining fast and second that he was allowed to present the bass at two shows and a Leonardo meeting.

It took a hole year for the bass to be finished. 20 weeks of building, problems with suppliers, health problems and some urgent repair work on other instruments. At some point he had to start again, as the original concept didn’t work out. Anyway, a year after ordering I drove to the far west of Ireland once again to collect another beauty.

It’s a beauty and it sound like a goddess. Perfectly balanced, a hell of a neck and the finest cherry sunburst I’ve ever seen. The top is hand carved spruce, sides and bottom are flamed maple with the bottom hand carved, too. Bridge and tailpiece are made of walnut. The fingerboard was an issue in the beginning. Ebony was not an option, as the bass was to be built out of non-tropical wood. Back in 2010 there wasn’t any option for the Singlecut. We got a few alternatives from several suppliers, but none worked well. At last we were contacted by rocklite as our project wasn’t a secret anymore. They’ve sent us some pieces and after Chris did some testing we decided to use it. It looks and feels like real wood and is durable. On the downside it’s expensive but to be honest it didn’t matter with that bass.

As the bass has a magnetic pickup, too, you can’t use nyloncore strings on it. By the way, the magnetic pickup is a perfect addition to the piezos. So I have to use Newtones custom made extra long ultra low tension steel core strings. A set of strings costs about 50 pounds Sterling and last for about a year.

We spent quite some time discussing electronics. I didn’t want to have a lot of controls on the bass. As I know my way around with electronics it took more time as necessary. The solution sounds strange but is perfect from a musician’s point of view. The preamp is fixed to make the archtop sound naturally. You can adjust the preamp through the battery compartment. There are three controls on the bass. A volume for the magnetic, a volume for the piezo and a tone control for the piezo. I’d prefer a blend instead of two volumes but we couldn’t find one to cope with magnetic and piezo. The custom-made Armstrong is mounted next to the fingerboard, so it provides warm sounds. the piezo can be anything between crystal clear and soulful. Blending those two together is magic.

Compared to the flattop the archtop provides less volume – the body is a bit smaller in size – but its sound is balanced perfectly. When micing the bass, the sound is gorgeous. It’s amazing how the bass sounds in any situation – miced, amplified or pure acoustic.

This one is a real masterpiece. 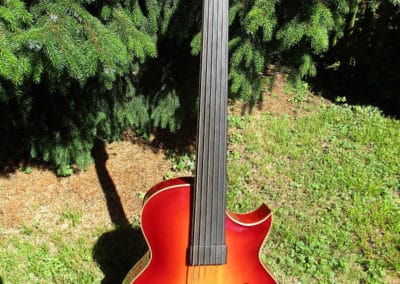 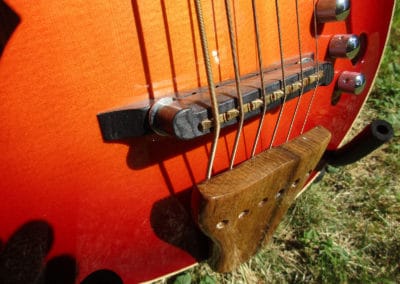 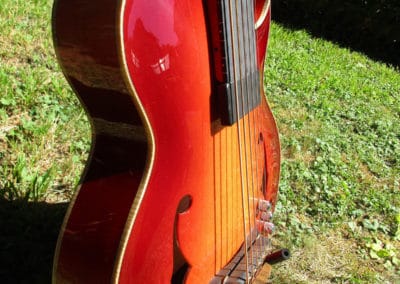 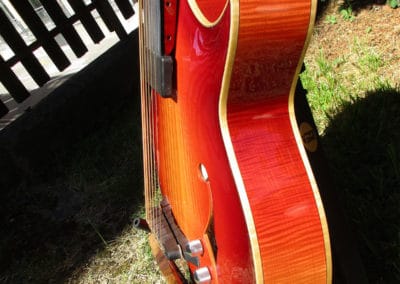 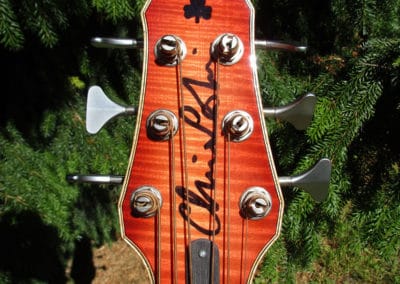 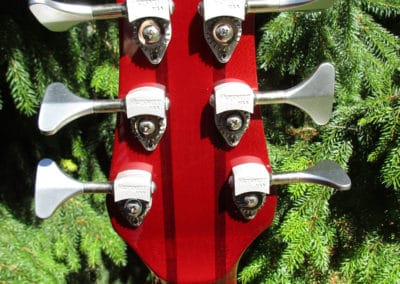 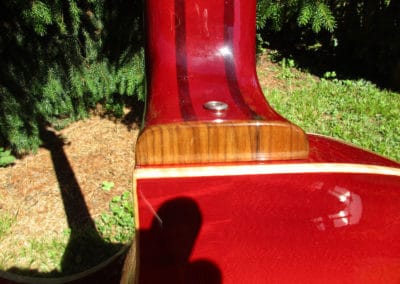 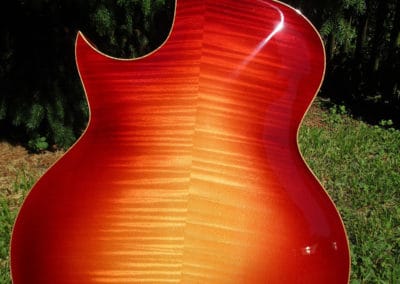 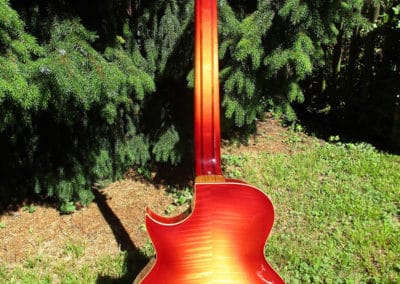 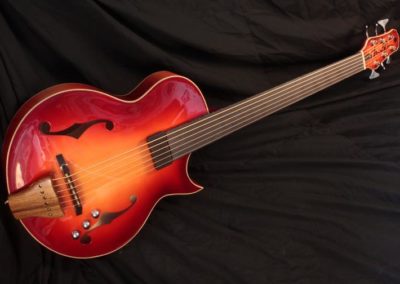 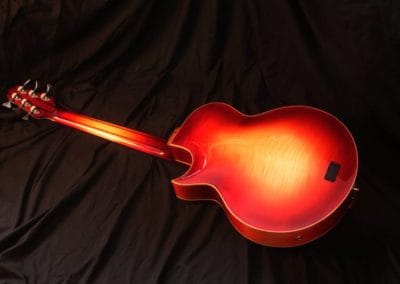 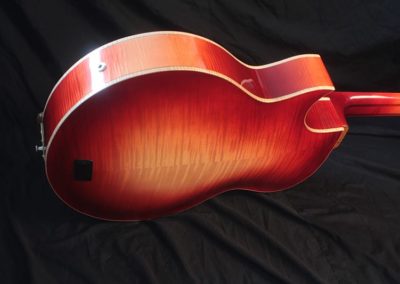 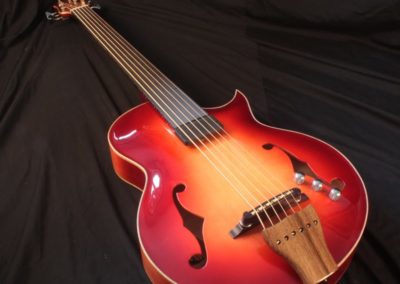